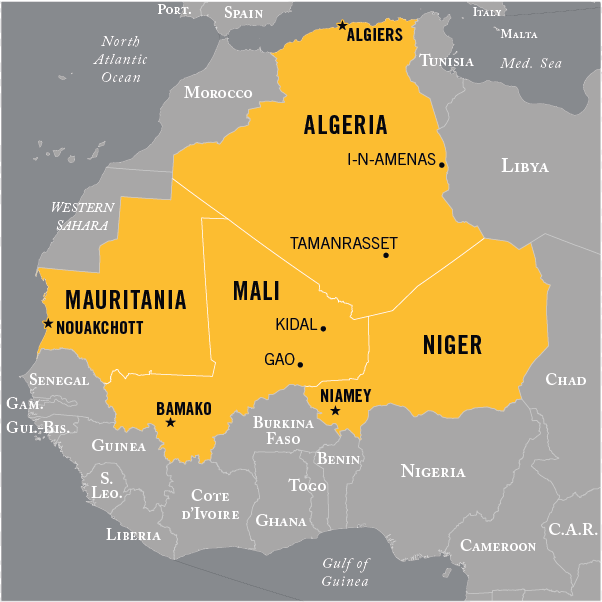 When we think of terrorism we think of the Middle East, this is reflected in the counter-terrorism strategies or the West’s ‘War on Terror’ centred around Afghanistan and Iraq. However, 20 years after 9/11, Jihadi influence is rising in many parts of the African continent. This is facilitated by weak armed forces and security alongside governmental corruption and lack of national cohesion. Attacks in countries not experiencing insurgencies have significantly reduced in recent years (notably from 2014-2019), so the West think their job is done. But attacks in Africa, alongside insurrections, are rising dramatically. The international community is paying concerningly little attention to this issue which is causing horrific humanitarian abuses within these countries let alone a potential global disaster epicentre.

The three main areas where Islamist insurgencies are operating is in Somalia (Creating instability in bordering regions of Kenya and inspiring violence in Mozambique and the Democratic Republic of Congo), the Sahel region of West Africa (also affecting neighbouring areas and countries), northeast Nigeria and the area around Lake Chad. Although there is international presence on the ground, including US, UK and French troops and projects, this is not enough. There is limited, if any, international knowledge and media coverage of the extent of this issue. Like with many humanitarian crisis people in developed countries have become numb to the real issues people have to face globally, images of human rights abuses and atrocities barely make us bat an eyelid anymore. It’s a natural survival tactic to primarily consider ourselves and people believe that these issues don’t directly affect us so why should we care. There is a consensus that there is nothing we can do so why should we worry about it. Nationalism and the concept of helping your own first has peaked in the UK post-Brexit and during the Covid-19 pandemic. But issues such as the rise of insurgents in Africa from a Humanitarian and a self-help point of view cannot be ignored any longer.

So, why are terrorists using Africa as their new stronghold? This is different to Afghanistan where terrorism stemmed from a civil war which facilitated the groups growth and strength, but, some of the factors are similar. There are local grievances present in both environments including intense competition for resources often leaving many without, and poor governance and security, leading to lack of infrastructure and service provisions. This is intensified by conflict, which is seen, for example; in Somalia with the ongoing devastating civil war and after rebellion in Mali in 2012. This leads to contributing factors of insurrections, including; young people searching for purpose and a sense of belonging, and individuals needing to support and protect themselves and their families. Terrorist groups adapt to appeal to the grievances of groups. For example, they will represent themselves as a way to get back at a government that has marginalised people and not provided them with adequate infrastructure and support.

Today, these localised insurrections do not pose a global threat, but they have a direct impact on the well-being of the civilian population, from deaths to displacement and increasing refugees. Furthermore, this undermines government’s legitimacy, creating tensions, instability and reinforcing conflict. If this is ignored by developed countries, who are continuing to reduce support for governments of countries in Africa, these authorities will become less and less effective at combating terrorist groups. This could lead to significant territorial gains and if these movements join to form an international terrorist network, this will become a global threat.

There is some hope, even if Western governments ignore responsibility. The Institute of Security Studies (ISS) has conducted research on how and why women in regions in Niger and Mali have been able to reject or disengage with terrorist groups (mainly the Boko Haram). Alongside fleeing or avoiding areas where the groups are active and avoiding publicly criticising them, some women interviewed in Niger explained that their knowledge of Islam, stopped them from joining the terrorist groups that were rising in their areas. Women in Mali noticed inconsistencies when deconstructing the religious arguments used by the terrorist recruiters in their country. This information highlights the importance of ensuring girls are educated from a young age also in religious studies which is often overlooked.

The link between joining to avenge the deaths of loved ones also needs to be broken and greater humanitarian support needs to be available for those fleeing so they do not end up enlisting due to the poor conditions in temporary camps. Although military responses can be effective at improving women’s safety and preventing recruitment into terrorist organisations it needs to be recognised that this is not the only method that should be used. Actions that address the root causes of extremism should be incorporated. Women’s education is one of these. Not only does it give them the power to question ideology, but it also gives them greater opportunity to enter stable employment, providing themselves and their families with financial stability and security so joining an extremist group becomes less economically attractive. Education is not only important for women but for everyone who is vulnerable to being recruited. The best way around this in communities where prominent figures, such as religious or tribal leaders, have significant influence is to educate these members. They play a gatekeeping role in information received and how it is interpreted so their influence will have a significant effect on the decisions made by community members.

Overall, the best way to combat the spread of extremism is to build the resilience of those at risk. In Africa, this is women and young people who are uneducated on the implications and moral inconsistencies of extremism. As is usually the case, education is the most powerful tool to turn this around. The international community needs to take notice and be proactive before it is too late, not only for the individuals and their families directly affected, but; also for the threat an international terrorist network poses.